Alas, 2014 was a rough year for archaeological (and paleontological) resources across the planet.

To our south we had the pillaging of Mayan ruins by narco-traffickers and the desecration of Nazca. Closer to home, we had dinosaur footprints stolen and then dumped in the Colorado River, we had an artist with no respect leaving her calling card across our national parks, and we seemed to have one vandalism case after another.

I could go on and on and on, but I resolve to be a positive person, focus on the good in people, the glass being half full, and all those other euphemisms we banter about at the start of a new year. And that got me thinking: What would my Top 10 wishes be for the year ahead? 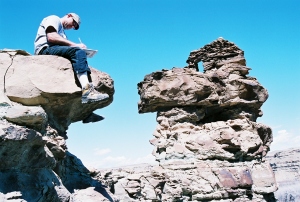 This could be you! Join. Donate. Volunteer.

In reverse order, of course, since Letterman Style requires it.

No. 10 – I wish that state educators will implement a requirement that no one can graduate high school without knowing the difference between an archaeologist and a paleontologist. Can I have at least a year without someone asking, “So, you study dinosaurs?”

No. 9 – I wish that Henry Walton “Indiana” Jones will actually publish his findings in a peer-reviewed journal. It has been over 30 years since you recovered that Ark of the Covenant, and still nothing? As Jesse Jennings was fond of saying, “Unreported field work is field work never done.”

No. 8 – I wish that we can have an entire year without a pseudo-history channel “documentary” where the host breathlessly reveals the certainty of lost Aztec gold in southern Utah. Enough already. Everyone knows it is actually lost Spanish gold and it is in the Uinta Mountains, not Kanab.

No. 7 – I wish that our state and federal judges will look at vandalism, looting and theft of cultural resources in the same light they would the theft of a Picasso or the destruction of a Rembrandt. It is not funny at all that shoplifters in our society often do more jail time than looters of irreplaceable cultural treasures.

No. 6 – I wish that the Obama Administration will have the courage to offer up some real protections for the archaeology of Cedar Mesa and Greater Canyonlands. Exactly how it is done is not the issue in my book. It might be the Bishop Plan, it might be an executive order, it might be re-prioritizing federal budgets. Just grow a set, Obama, and get it done.

No. 5 – I wish that the federal government would put as much of its admittedly limited resources into managing and protecting archaeology as they do into pandering to oil and gas development. Okay, I would be happy with less. Some estimates place the value of federal tax subsidies to the oil and gas industry at around $4 billion a year. How about 10 percent of that ($400 million) to protect our cultural heritage for future generations? Maybe 5 percent?

No. 4 – I wish that San Juan Commissioner Phil Lyman will recognize the audacity of his demand to use taxpayer money to cover the legal expenses resulting from his shenanigans when he illegally rode his OHV into an area closed because of its archaeological resources. Sir, it was your “political statement” and you should own up to that.

No. 3 – I wish that all OHV users will stay on designated trails and that we can find common ground on the simple concept that the right to ride your OHV is NOT protected by the Second Amendment (but your right to carry an AK-47 while riding it certainly is).

No. 2 – I wish that Utah Gov. Gary Herbert would call a press conference to announce that he is pulling the plug on the state’s effort to wrest control of federal lands, and his statement reads, at least in part, “Public lands belong to all Americans and all Americans are welcome on public lands in Utah.” (Hey, this is my wish, not my expectation.)

No. 1 – I wish that all of you will join CPAA and become part of our community and our commitment to protect treasured resources. Go to http://www.CPArch.org and pledge your support. Join. Donate. Volunteer.

Please Note: Many (but not all) of the statements offered above are offered with my tongue planted firmly in cheek and there is no intent to offend, irritate, defame or otherwise rile any person, belief or political conviction. My intent is to make you smile, laugh, shake your head, smirk and offer your own sarcasm.

Jerry D. Spangler is executive director of the Colorado Plateau Archaeological Alliance. He can be reached at jerry_cpaa@comcast.net

One thought on “Ten Archaeology Wishes for 2015”